Solid Points For Sykes And Brookes At Snetterton 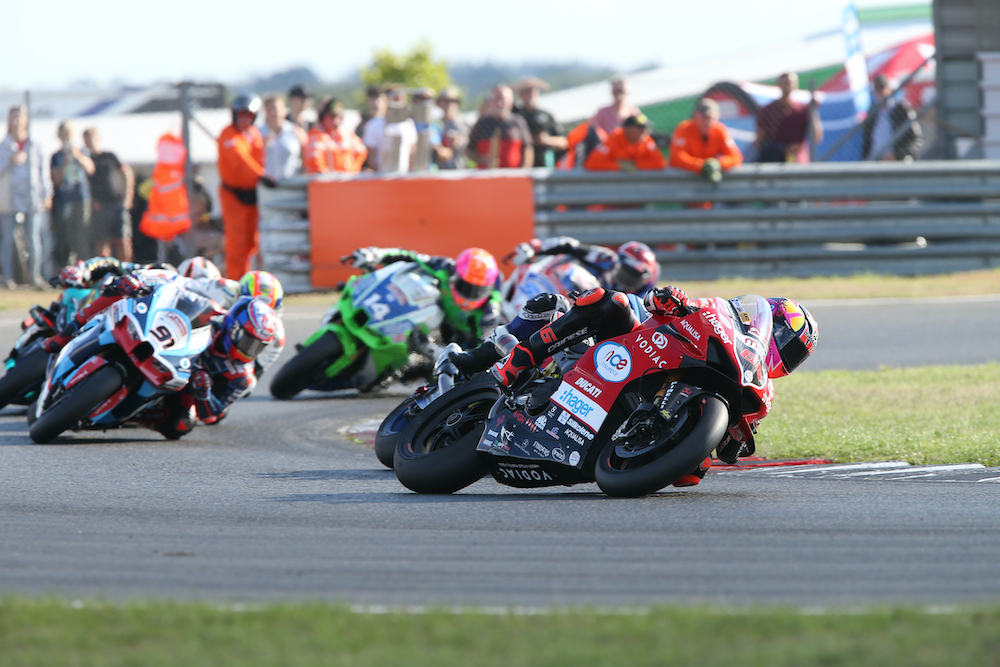 After mixed conditions during practice and qualifying, the MCE Ducati pairing of Tom Sykes and Josh Brookes both scored solid points on Saturday in the opening British Superbike Championship race at Snetterton with Sykes equalling his best result of the season in seventh.

Having enjoyed a good test at the 2.99-mile circuit in pre-season, Paul Bird’s Penrith-based team had high hopes coming into the event, but the fine weather then was replaced by damp conditions with both riders suffering albeit in different ways during qualifying.

Former World Superbike champion Sykes soon went quickest in the wet session on the factory-backed MCE Insurance Ducati Panigale V4R only to have a nasty crash on his next lap, whilst Brookes struggled with the bike in the tricky conditions. As a result of his crash, Tom ended up eighth overall, for a third row start, with Brookes four places further back and at the end of the fourth row.

Fortunately, conditions had dried up by the time the 12-lap eBay Sprint race came under starters orders and Sykes made a good start to complete the opening lap in sixth place, with 2015 and 2020 BSB Champion Brookes in 14th.

The safety car was soon deployed due to an early incident with racing resuming on lap four and Tom had his hands full as he tried to keep Leon Haslam and Andrew Irwin behind him. Slipping back to eighth, a late crash for Irwin promoted Tom back up to seventh and this was where he finished to match the result he’d taken earlier in the season at Donington Park.

For Brookes, it proved to be a more challenging race and he dropped back to 15th at one point although the Australian ace regrouped in the second half of the race and took the chequered flag in 13th place for three hard-earned points.

Saturday’s race result meant Sykes and Brookes started Sunday’s opening race, held over 16 laps, from tenth and 15th on the grid respectively but both riders had cause for optimism after a strong morning warm-up. Brookes, in particular, showed great pace on the factory-backed MCE Insurance Ducati Panigale V4R as he recorded the third fastest lap in the session, which was comfortably his best lap of the weekend.

Both riders were able to move forward on the opening lap from their starting positions, with former World Superbike champion Sykes up to eighth and double BSB champion Brookes slotting into 13th.

Two laps later and Sykes was up to sixth but as the race progressed, he slipped back as a big group of riders disputed the positions and he had to settle for tenth at the chequered flag. Brookes, meanwhile, was unable to improve and after a relatively lonely ride, he crossed the line in 12th place.

The final race of the weekend saw Tom and Josh start from 12th and 14th respectively on the grid but, unfortunately, Tom’s race only lasted two and a half laps as he was taken out by another rider on lap three, fortunately suffering no injuries.

For Josh, a solid start saw him gain three places on the opening lap and moved up to tenth on lap three after his teammate’s demise. Here he remained until half race distance when he was pushed back to 11th and it was there where he finished to consolidate his 12th place in the championship table.

Tom Sykes: “The weekend got off to a good start, but I suffered a big crash in qualifying which set us back a bit. I felt good on the bike in the races but tenth was the best I could manage in the opening race. Any hopes of a good result in race two disappeared when I was crashed into by another rider which was very disappointing but that about sums up our luck. We’ll dust ourselves down and regroup for the next round at Oulton Park.”

Josh Brookes: “We had a good morning warm up, but it proved to be false hope as I don’t think a few of the other riders were trying that hard in the misty conditions and we ended up having two more challenging races. The final race of the weekend was marginally better as although I didn’t feel that fast, the lap times were quicker than what they had been all weekend. It’s not an improvement to get excited about but I’m an eternal optimist and am determined to make things better. I’m as motivated as ever and although the championship isn’t possible, we have a lot of personal pride to fight for both as a rider and team in the remaining seven races, so we won’t give up.”

Johnny Mowatt, Team Co-ordinator: “Not for the first time this season, there was a lot of desperation out on track this weekend especially in the first couple of laps and Tom was a victim of that in the final race. Luckily, he’s OK but I don’t know why riders aren’t bedding themselves in the first couple of laps. Overall, though, it’s been another disappointing weekend and whilst Tom had a couple of top ten places, and Josh scored points in all three races, we’re not a top ten team at present so we need to keep giving our all to get back to that position. Tom has got form at Donington Park which is coming up soon, with Josh having the same form at Brands Hatch and Oulton Park so we’ll look to end the season on a positive note.”