MCE Ducati have a positive weekend at Oulton Park 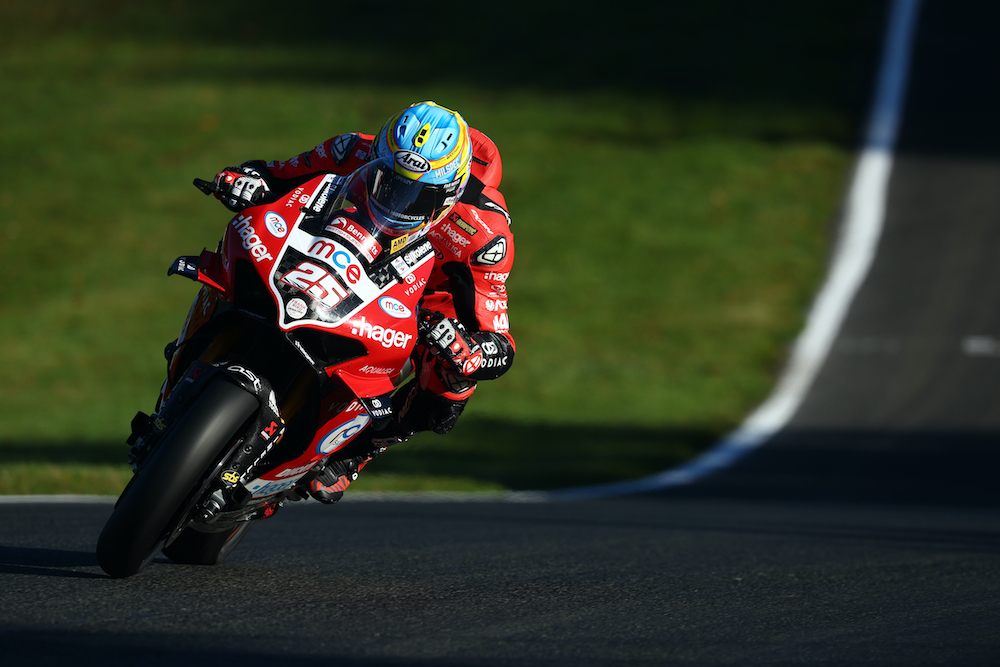 This weekend the MCE Ducati team were in action at Oulton Park for round nine of the British Superbike Championship with Josh Brookes and Tom Sykes.
Lap times from Friday meant Australian Brookes had to go in the opening Q1 qualifying session but he comfortably topped that with a lap of 1.34.291 to progress into Q2 and although he went quicker on the factory-backed MCE Insurance Ducati Panigale V4R with a lap of 1.34.175, which was his quickest of the weekend, it was only good enough for 13th overall and the fifth row of the grid. However, his lap time was only four tenths of a second adrift of a front row start whilst Yorkshireman Sykes was only three tenths of a second slower. That put him three places and one row further back with the former World Superbike Champion having to settle for 16th after losing some time in the pits at the beginning of the session whilst changes were made to the MCE Insurance Ducati. In Saturday’s race which got underway under threatening skies, both riders made steady starts, Josh in 14th and Tom in 15th but there was little change for the first half of the 14 laps and it wasn’t until lap 11 that both riders were able to gain a position. However, there was plenty of drama in the closing laps, which included Jason O’Halloran and Tarran Mackenzie crashing out, and the net result was that Josh took the chequered flag in 11th place with Tom one further place back in 12th. However, Peter Hickman, who’d crossed the line in fourth, was excluded for his part in O’Halloran’s crash and that promoted Josh and Tom up to tenth and 11th respectively to add to their points tallies.

On Sunday the MCE Ducati team enjoyed one of their best days of the season with both Tom Sykes and Josh Brookes taking a brace of top ten finishes. Indeed, Sykes was able to record his best set of results to date for Paul Bird’s Cumbrian-based team with sixth in the second race today being his best result of the year on the factory-backed MCE Insurance Ducati Panigale V4R. Lap times from Saturday’s eBay Sprint race meant the two riders had a tough job on their hands for the opening 18-lap race with Josh starting from 16th place and the head of the sixth row and Tom three places and one row further back. However, it proved to be a race of attrition with two red flags bringing a halt to proceedings and at the third attempt, it was eventually run over just seven laps, Tom getting the better start to complete the opening lap in tenth with Josh one place behind in 11th. It was Yorkshireman Sykes who was able to make the most overtaking moves in the short race and he crossed the line in a strong seventh, equalling his best result of the season so far. Australian double BSB champion Brookes regrouped as the race wore on and was in eighth place at the chequered flag to make it a strong race for both riders and the MCE Insurance Ducati team. The results gave the two riders their best starting positions of the weekend for the final race with former World Superbike Champion Sykes in sixth and on the second row with Brookes in ninth and they both made it count, running with the leading pack throughout. Both riders ran inside the top nine for the entire 15 laps and, at one stage, just two seconds covered the leading nine riders. Tom again had the better result as he finished sixth, which was so nearly fifth, whilst Brookes also had a strong ride into eighth. Tom Sykes: “Today has been a better day in terms of the results achieved with sixth and seventh being my two best finishes so far this season but it’s still frustrating not being in a position to show my true potential. Fair play to the team, they made a number of slight changes to try and help with the feel of the bike I was getting so I was able to pull some average results out of the bag. If we could get a better package, we’d be able to show much better but getting closer to the leaders was a small step forward whilst starting from the second row also made things a lot easier. It’s Donington Park next, a circuit I love, so let’s hope we can make further improvements there.” Josh Brookes: “In some respects, we’ve had a better day than some others, but today’s races were still hard, and I felt I could have visited the scenery myself on more than one occasion. I was glad I didn’t, but the weekend has again shown just how sensitive the bike is to the changes made. We’ve made some really minor changes to the bike this weekend, all of them in what we believed were in the right direction, but it was amazing how much they changed the characteristics of the bike. We went back to what we had in qualifying today, which was better than what we’ve had recently, and I felt like I was competitive again today, especially in the last race. They are small positives, but we’ll take every one we can.” Johnny Mowatt, Team Co-ordinator: “Today has proven what a difference it makes when you start on the first three rows and how critical it is for your race position. The riders are able to do the competitive lap times consistently as they’re running with the riders they should be, knowing when to brake, when to accelerate and not riding tense. We were only a couple of seconds off the race win in that final race and whilst we go racing to get wins and podiums, it’s nice to have both riders finish in the top ten in all their races and good to see Tom get his best result of the year. We’re still lacking in a few small areas so will keep looking to improve at the final two rounds whilst I’d like to wish all the injured riders a speedy recovery.”
Further details can be found at the MCE Ducati website – check out www.pbmuk.net - and for information on the championship. Please visit www.britishsuperbike.com.  Pictures attached courtesy of Double Red: Josh Brookes (25)