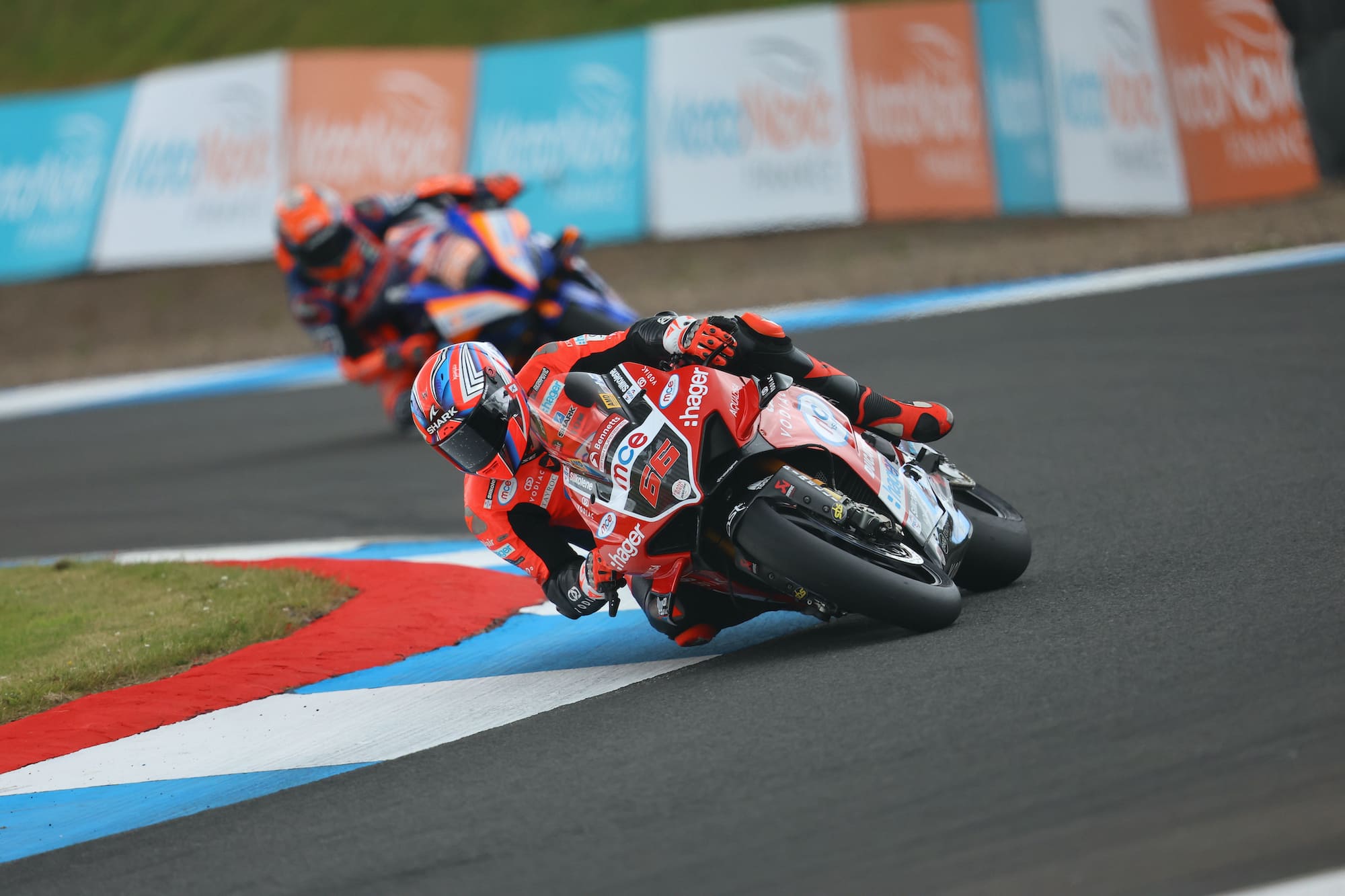 The MCE Ducati pairing of Josh Brookes and Tom Sykes had an encouraging raceday at Knockhill with three top ten finishes recorded in the two British Superbike Championship races, with former champion Brookes recording a best result of sixth place to move within one place of the Showdown.

With the strong winds having subsided, Brookes and Sykes started the opening 30-lap race from 12th and 15th respectively on the grid, but both were able to make good strides forward on the factory-supported and MCE Insurance-backed Ducati Panigale V4Rs and put in a number of overtaking manoeuvres.

Indeed, a great start by double BSB champion Brookes saw him immediately up inside the top ten and he was rewarded at the chequered flag with a fine sixth place, his second highest finish of the season to date. Yorkshireman Sykes, meanwhile, was up into the top ten by half race distance, but ultimately had to settle for 11th.

With a second row start for the final race of the weekend, Australian ace Brookes was hopeful of improving upon his sixth place and it looked like he’d do just that when he moved into third on lap 11. However, a slight mistake at the chicane a lap later dropped him back to fifth and in the second half of the race, he found himself shuffled back to an eventual seventh. Teammate Sykes, the 2013 World Superbike champion, ended his weekend with a solid tenth place.

The day’s results moved Brookes up to ninth overall in the championship table, just seven points off the all-important top eight Showdown places heading into the next round at Brands Hatch next month with Sykes in 14th.

Josh Brookes: “We’ve shown some promise this weekend and although the results don’t show it, we’ve been a lot closer to the front and closer to fighting where we should be. We brought the progress made at Donington here to Knockhill, not a circuit I’ve enjoyed the best results in the past, and we’ve made constant steps in the right direction. We had a bit of a lull in qualifying but other than that, we’ve moved forward and whilst I was disappointed to have made a mistake in the final race, the fact we were in third place at the time is positive. It’s been a better showing all round and we can be optimistic heading into the next round.”

Tom Sykes: “The weekend started off well and despite not riding here for so long, I felt at home in the wet conditions on Friday. I was fastest for the most part and I felt really comfortable but despite me doing a rain dance, it was dry conditions that prevailed and that’s where we are struggling. There are lots of areas that the MCE Ducati is really good in, but in a couple of crucial ones, we have a lot of work to do. It's tough and I’m finding I’m not able to perform to my best ability but hopefully we can find an improvement soon.”

Johnny Mowatt, Team Co-ordinator: “It was a positive day for us to be fair and although the first race results were compromised again by our grid positions, the changes we’d made overnight certainly helped and Josh was able to lap quicker than what he’d done in qualifying. Row two for the final race was a million miles better and put him in a better position to be in the fight. It was nice to be at the sharp end again and it was a shame that he had one small mistake as the rest of the pack pounced on that and he went from third to an eventual seventh. He was fighting for a podium finish, and we’ll look to build on that. For Tom, he’s still trying to understand the parameters of the bike and its limitations whilst not having been to Knockhill for 14 years was always going to be tough. We’re still trying to get him comfortable on the bike and understand the changes that are being made so it was a bit of a test session, and we’ll look to re-group over the break. There are positives to take away and we go to Brands Hatch next where both riders have good memories.”