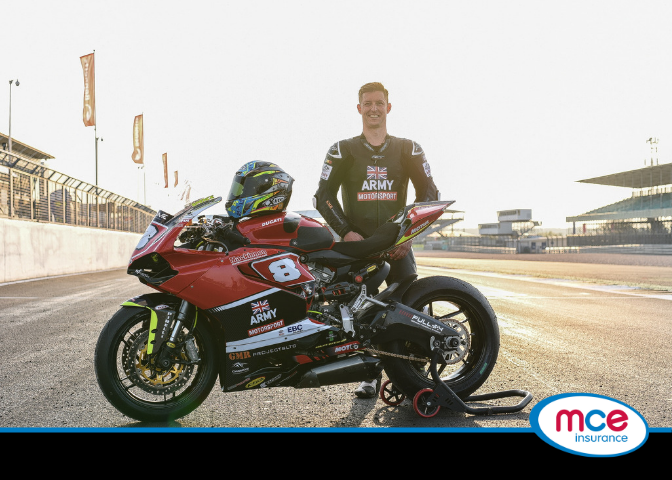 MCE Insurance are pleased to report that a salvaged motorcycle sold via their Big Ed eBay page has found a new home – within the Ducati TriOptions Cup!

The eBay page advertises bikes that have been through the MCE claims process, purchased from policy holders that do not want their bikes repaired.

The bike was snapped up by Richard Spencer-Fleet, a talented rider with an eye for a great deal. Richard races for RSF Racing in the championship, in association with The Army Motorcycle Road Race Team.

Richard describes the Ducati 959 he saw listed on Big Ed’s eBay page as the perfect tool for the job – the motorcycle had suffered only cosmetic damage in a low speed incident, and was listed on the eBay page at an amount substantially lower than its £14,000 retail price.

To maximise the potential of the bike, the team have kitted it out with the latest technology, ranging from uprated Ktech Suspension to the very best performance exhaust – and obviously removing the indicators!

The bike has already battled the elements in 2019, finishing 9th at a very wet Donington Park this year, and has been consistently in the points.

Head of Sales and Salvage Mark Etheridge comments: “we absolutely love stories like this – Richard found this Ducati 959 and saw the potential that it still had. It’s now roaring around circuits nationwide, that’s a pretty amazing story”

Richard Spencer-Fleet added: “I’ve used Big Ed’s eBay page on a number of occasions, and they’ve always been great. The Ducati had really low mileage and just panel damage. It didn’t take much to turn it into a race bike at all.”

Richard’s Dad has actually just bought a Triumph 765 from the eBay page, which they are also looking at race prepping! Coming to a championship near you….

Big Ed’s eBay page can be found at www.ebay.co.uk/usr/mce_big_ed

You can find Big Ed’s Parts page by following https://www.ebay.co.uk/usr/mce_big_ed_parts