Brookes And Sykes All Set For Thruxton Thriller 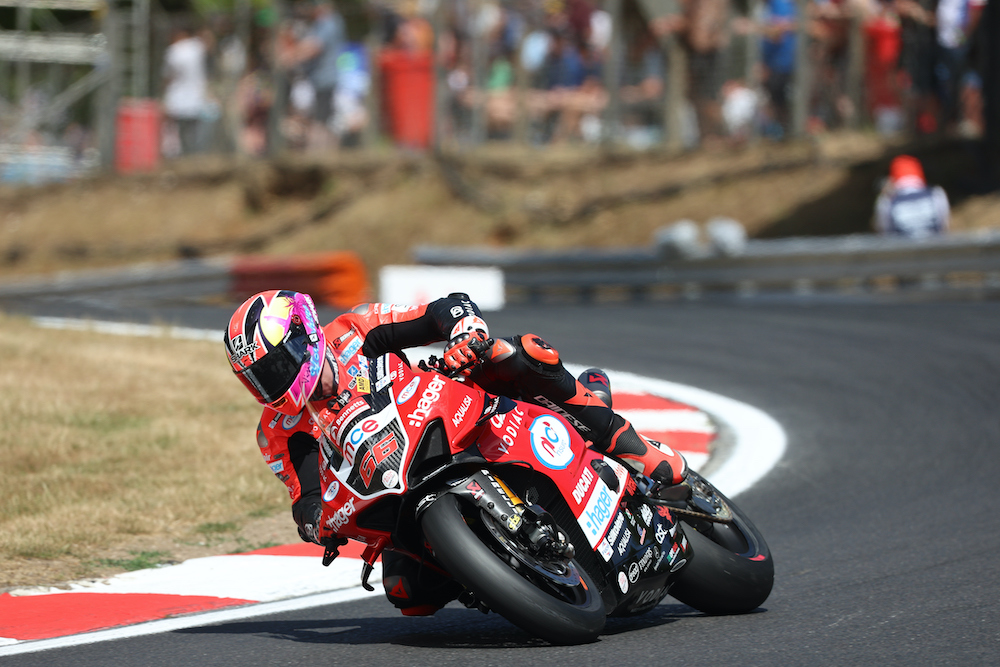 The fastest track in the 2022 British Superbike Championship hosts round six of the series this weekend when MCE Ducati riders Josh Brookes and Tom Sykes will resume battle around Thruxton. The Hampshire circuit has been a good hunting ground in the past for Paul Bird’s Lake District-based team especially for Aussie Brookes who set the lap record back in 2019 aboard one of the team’s Ducatis at 1:14.655. And former multiple BSB champion Shane Byrne set the fastest ever lap in 2016 aboard a PBM Ducati at 1:13.843 so the omens are good. Both Brookes and Yorkshireman Sykes know a solid weekend of high-scoring points aboard the MCE Insurance-backed and factory-supported MCE Ducati Panigale V4Rs is a must, given they are both outside the top eight cut which will decide those riders who will go on to contest the title in the Showdown later in the season. Brookes has an impressive record with nine wins and five podiums to his credit over the years, the last of which came in 2019, and is hopeful he can continue his recent improved form to mount a late bid to add to his BSB crowns from 2015 and 2020. Former World Superbike champion Sykes hasn’t had the best of luck when he’s raced at Thruxton in the past but the fast, flowing nature of the circuit should suit him as he goes in search of his first silverware of the season. Just nine races remain, including the three at Thruxton, to decide the top eight Title Fighters so with races running short, both riders will be hoping to add substantially to their points tally. Josh Brookes: “I’m eager to get down to Thruxton and to get going again after the two crashes at Brands Hatch which was less than ideal. Despite that disappointment, we still have an upward trend in the garage and the motivation is there, so we’ll keep pushing. It’s better to be fighting for the podium and to crash out rather than languishing down the order. Everything is still positive, and we have some changes to make this weekend which I’m excited about so we’re ready to go.”  Tom Sykes: “We are heading to Thruxton this weekend which is a fast circuit, and the racing is always great around there. I’m looking forward to getting back on the MCE Ducati and continuing the progress we have been making recently. It’s important we keep working towards our goals so hopefully we can get some good results and continue moving forwards.” Further details can be found at the 2022 Paul Bird Motorsport website – check out www.pbmuk.net - and for information on the championship. Please visit www.britishsuperbike.com.

Did you know you could win tickets and hospitality with the MCE Ducati team when you’ve got a policy with MCE Insurance? Get a quote today to be part of the action.
Picture attached courtesy of Double Red: Tom Sykes (66).